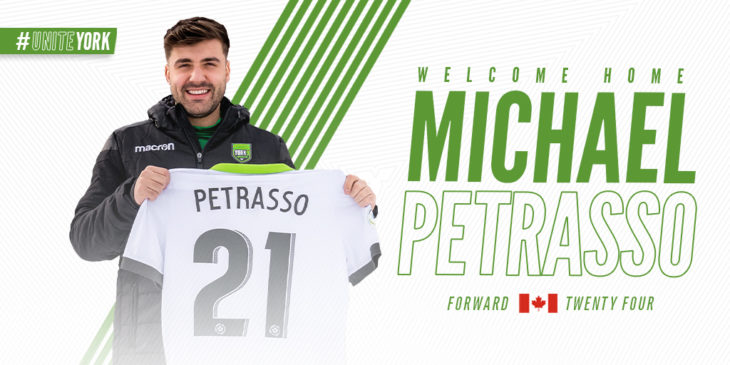 Toronto, ON (January 24, 2020) – York9 FC is proud to announce the signing and return home of local boy Michael Petrasso. The winger becomes the 3rd new player signed by the club for the 2020 season.

Manager Jimmy Brennan said “We kept a close eye on Michael all of last season. He’s from the York community and we really wanted to bring him home. He’s a leader on and off the pitch, and the type of guy who will fit right into our squad and be a dangerous asset going forward – (He is) an absolute nightmare for defenders.”

Petrasso began his youth career with the Toronto FC Academy in 2010 where he played for two seasons, helping lead the team to the Professional Development League 2 (U-18) title in his first season. He then continued his career overseas with Queens Park Rangers FC (English Championship), and represented Oldham Athletic, Coventry City, Leyton Orient, and Notts County on loans before returning to Canada in 2018 to join the Montreal Impact.

“I can see the real ambition and desire to win at York9.” Petrasso said. “I’m here to bring a title home, that’s what excites me the most.”