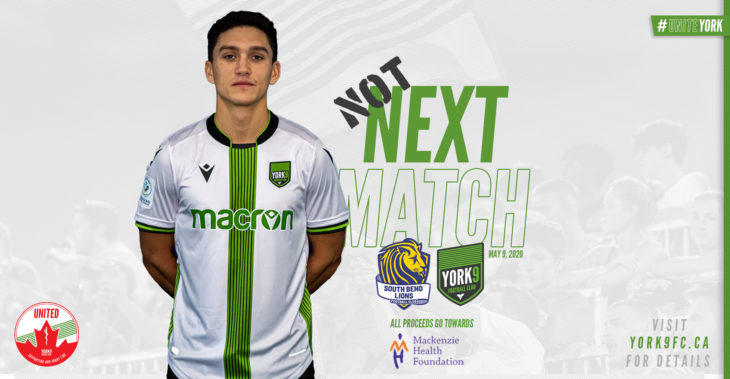 Toronto, ON (April 21, 2020) – The Nine Stripes were enjoying a successful pre-season camp in Orlando, Florida when COVID-19 prematurely cut short their stay in the US.

While current lockdown protocols mean they won’t be heading back over the border anytime soon, York9 FC will be part of special matchday event with a difference next month.

On May 9, York9 FC has agreed not to play South Bend Lions, a new USL League Two franchise, as part of the Indiana-based team’s plans to mark the date with a socially distanced celebration.

The aim is for supporters to come together to stage a virtual tailgate with fans from teams across the world on what would have been the date of South Bend Lions’ inaugural game.

Supporters will even be able to purchase etickets from both York9’s online shop and via South Bend’s repthebend.com store, for $1 in their respective currency, for the game that won’t be played.

Managing consultant Angus McNab explained: “Chris [Rivett] and Ritchie [Jeune] are very good friends of mine and I’ve been chatting to them about South Bend Lions since they started to explore opportunities in the North American market.

“When Chris called me about the possibility of ‘Not Playing’ them in their inaugural fixture, I thought it was a brilliant spin on things and all about making the best of the current situation.

“When we agreed it could form part of our Healthcare Heroes program as well and our fans could also raise funds and buy tickets to the ‘Not Inaugural Game’ then it was even better.”

Chris Rivett, part of the leadership team at South Bend Lions, added: “When it became apparent quite early on that we wouldn’t be able to stage events as we’d planned for our inaugural game, we started evaluating what we could do instead and how we could use that to support relief efforts locally.

“We decided that if we couldn’t host everyone as we’d envisaged, then we should aim not to play lots of clubs on May 9, while still enjoying the day with a tailgate party from the comfort of our own homes.

“We are keen to use this opportunity now to connect communities from different countries, and we’re delighted York9 FC has agreed to be the first team to support our non-gameday celebration and we look forward to not playing them.”

Proceeds raised will be utilized to provide support to relief funds in Canada and America, with York9 FC donating to Mackenzie Health’s COVID-19 Response Fund.