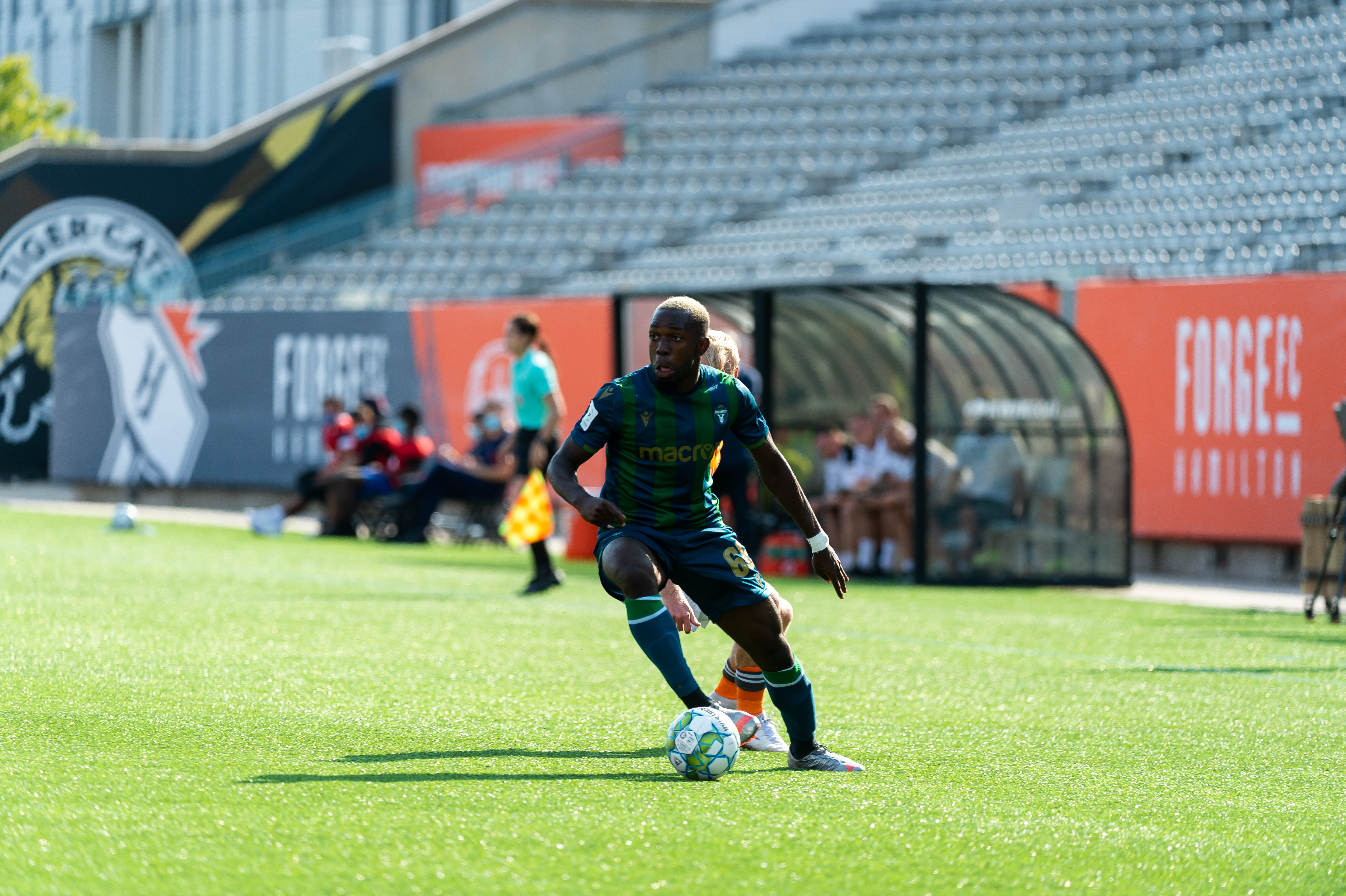 Two York United goals just moments apart in the second half were the difference on Saturday afternoon, as The Nine Stripes beat Forge FC 2-0 in the latest edition of the 905 Derby.

Alvaro Rivero had the first great chance of the match, as York United were awarded a penalty in the 17th minute. Diyaeddine Abzi was brought down in the box by Johnny Grant, giving Rivero a shot to take the lead from 12 yards out. Diving to his right, Triston Henry stopped Rivero’s low shot, keeping the match scoreless.

A couple of minutes later at the other end of the pitch, Forge attacker Joshua Navarro fired a shot off the post from the edge of the box, as Forge looked to take the lead themselves. Navarro was also brought down in the box in the first half, but the referee waved away the Forge claims for a penalty of their own.

Of the eleven combined shots taken in the first half, seven were taken from outside the penalty area — with York firing four of their six from long range. Many of them were efforts that missed the target, or were met by an easy save — with the exception of Navarro’s shot that struck the post — and the first half ended 0-0.

Forge again struck the left post in the 57th minute, this time off the foot of Paolo Sabak. Weaving around several York defenders, the Belgian attacker managed to make some space for himself before curling a shot at Nathan Ingham’s goal. It beat the York goalkeeper, but came crashing off the outside of the post.

Isaiah Johnston and Dominick Zator forced huge saves from Triston Henry at the other end of the pitch shortly after, but the Forge goalkeeper held strong as well, but at the hour mark York broke the deadlock.

Making a run down the right side to beat two defenders, Max Ferarri fired the ball into the box, and whether intentionally a shot or not, it hit the far post and went into the net. Henry tried to react, but wasn’t able to reach the ball, and it was 1-0 to York.

The Nine Stripes doubled the lead just two minutes later, as Alvaro Rivero swept home a free shot from a few yards out. On a counter-attack after Forge tried to respond quickly, Ferrari found an overlapping Johnston with a pass to his right, who played a low cross in front of Henry.

The Forge goalkeeper tried to block the cross, and got a touch on it, but it fell to Rivero, who calmly passed the ball into the net from inside the six-yard box to make it 2-0.

Forge came close to pulling one back in the 90th minute, as Woobens Pacius and Mo Babouli fired shots at Ingham from close range, but the York goalkeeper made himself big and blocked both, before Babouli headed a third effort wide of the goal.

York held on for the duration of stoppage time, winning the match 2-0.

With the three points, York jump back into fifth after temporarily dropping down a place as HFX Wanderers beat Atletico Ottawa earlier in the day. They’re now tied with fourth-placed Valour FC on 22 points as the race for the fourth playoff spot heats up. Forge remain in third place, behind Cavalry FC and Pacific FC.